Venice is a city located in Sarasota County, Florida with a rich history and a welcoming atmosphere. According to the U.S. Census Bureau’s 2007 estimates, the city had a population of 21,015. Venice is a well known spot for its large population of seasonal occupants, both old and young, who come to Venice for its calming atmosphere and exquisite beaches. Discover more about Venice by visiting their official website at:http://www.venicegov.com/.

Venice originated as a “railroad town” in the late 1860s and has since grown to a beautiful area brimming with rich history. The first settlers arrived in Venice after Congress passed the Homestead Act, which offered 160 acres of land to homesteading families. John and Eliza Webbwere the first to settle in Venice and shortly after other families began arriving including Robert Roberts, who Roberts Bay is named after. Frank Higel, who originally lived in Venice, Italy, submitted the name of Venice because the coastal town reminded him of his own hometown. The area originally named Venice is actually the Nokomis area now, but the locale of Venice was changed after a wealthy widow, Bertha Palmer arrived from Chicago in 1910 and acquired 140,000 acres of land in the Manatee County area. With her influence, the area was able to establish a railroad terminal near Roberts Bay and Palmer also managed to have the name of Venice relocated to the current Venice area, since the main railroad station and post office were located there.

Dr. Fred Albee and his wife Luella are responsible for recruiting John Nolen, a well-known city planner during the 1920s to begin formulating plans for the town to mimic a Northern Italy town. Albee bought a considerable amount of land, now known as the Venice/Venice Beach area, south of Roberts Bay from the Palmer family and requested Nolen to begin building plans. Much of the city plan that currently exists in the downtown area is the original building plan of Nolen and Albee. Most coastal towns of the 1920s did not have such a well thought out plan as Venice did, making Venice a unique historical gem. Many of the buildings that were constructed in the 1920s still exist today, well preserved in the downtown area. Today, local Venice residents take pride in the history of their town and have invested in preserving this history through the Archives and Triangle Inn Museum located at the Historic Triangle Inn at Blalock Park. 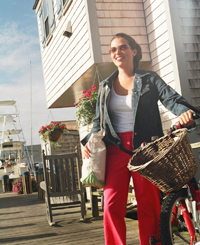 Venice, Florida is home to an excellent County Parks and Recreation Department that operates and maintains several parks with a variety of amenities including swimming, baseball, basketball, volleyball, softball, shuffleboard, football, and soccer facilities. The Venice County Parks and Recreation Department meticulously maintains its parks with tropical flowers, foliage, palms and pines, making their parks into places where people can stroll or rest on benches or watch their children play. With more than 30 parks in the Venice area, Venice County Parks and Recreation Department runs everything from Little League ball fields to beaches on the Gulf of Mexico. These parks also include a beach that allows dogs, a 10-mile linear walking and bicycling trail along both sides of the Intracoastal Waterway, and various pocket parks with fountains, beaches and shade trees.

Venice is a beautiful community in Florida and a very popular place to live for retired seniors and families. Venice also attracts numerous visitors annually with its affordable restaurants, bars, and nearby casinos. With legendary beaches, supreme fishing, and an excellent place to discover beautiful shells and shark teeth, Venice has something for everyone. Venice’s beaches are family friendly and easily accessible with parking, food concession, shelter, two sand volleyball courts, picnic areas, and boardwalks.

Discover what events Venice has to offer by visiting their official event calendar at: